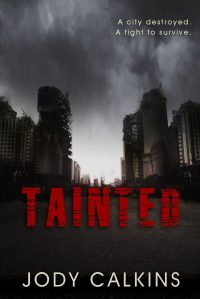 There’s only one hope left for the tainted. Escape the city or die.

Sixteen-year-old Charlotte Fisher is trapped inside a walled city with one hundred genetically enhanced wolves, the by-product of a scientist’s pet project gone awry.

When wolves find their way inside her city and kill the majority of the population, including her family, Charlie has nothing left to live for. That is, until a mysterious young man drags her out of her home and gets her to safety.

But it soon becomes clear that their one hope of survival is escaping before bombs level the city to the ground. Or before the city guards discover they’ve been tainted with the wolves’ blood.

Suddenly, getting out alive isn’t as easy as hopping the wall. Especially when the scientist’s son shows up and demands an escort to his father.

Set in the world of The Hexon Code, but thirty-three years after Shattered, Tainted is an action-packed thriller about love in the midst of death and destruction in a dystopian world and an alliance more powerful than anything known to humankind. Perfect for YA thriller fans!